The history of internationalism was quickly forgotten following the fall of socialist regimes in Eastern Europe. But now these stories are surfacing once again, fascinating a new generation alive to conflicts over peoples and cultures on the move in today’s global order and seeking fresh takes on the past. This festival presents a rich and exciting range of films inspired by ideas of revolution, national liberation, and solidarity between socialist Eastern Europe and the Global South.

Centre for the Study of Equal Opportunity Policies at the Political Science Department, University of Bucharest

Post World War II, as both decolonisation and new forms of globalisation accelerated, new linkages opened up, and existing ties were remade, between what were once called the ‘Second World’ (from the Soviet Union to the GDR) and the ‘Third World’ (from Latin America to Africa to Asia). Contacts multiplied through, for instance, the development of political bonds; economic development and aid; health and cultural and academic projects; as well as military interventions.

Yet these important encounters, and their impacts on national, regional and global histories, have hitherto only played a marginal role in accounts of late 20th century globalization, which have mainly focused on links between the West and former colonies, or between the countries of the ‘Global South’. 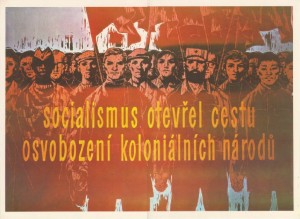 There is still little study of the interaction between these areas, where commonly shared – and contested – beliefs in the power of socialist modernization and anti-imperial culture opened up possibilities of meaningful political, cultural and economic transfers during the Cold War and its aftermath.

Seven academics, two postdoctoral fellows and two PhDs will address both how socialist states in Europe crafted a global role for themselves in the postwar period, and how these international engagements reshaped socialist politics, societies and cultures ‘back home’. In doing so, it seeks to provide new insights into the circulation of ideas during the Cold War and to explore ‘the socialist world’ as a dynamic hub of global interactions during the second half of the twentieth century.